The untold truth about school uniforms 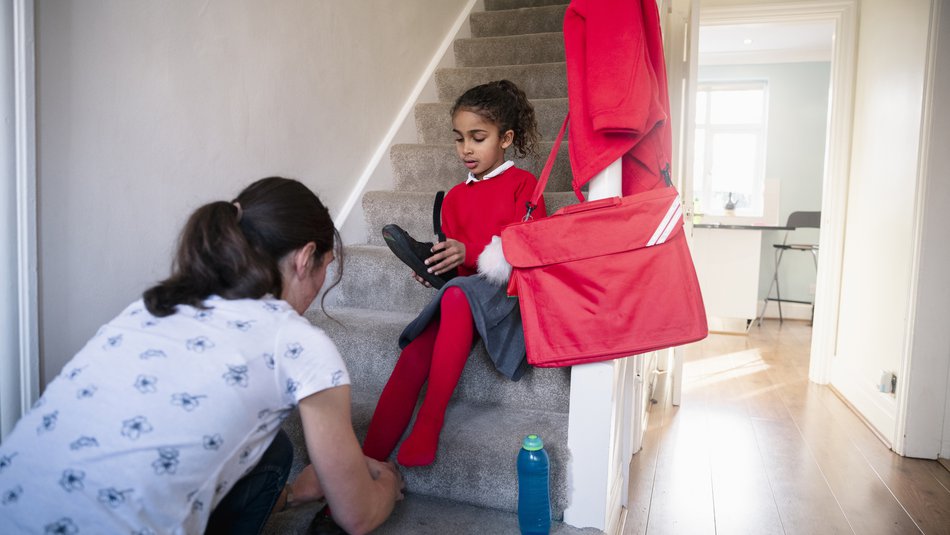 For some families, 'back to school’ season involves a trade-off between putting food on the table or buying their children their new school uniform

No parent wants to deny their child the things they need.

But, for families already facing financial hardship, school uniforms pose a cost that some parents simply cannot meet. £10 for a couple of shirts, £50 for a blazer, £30 for pair of new shoes – the cost quickly adds up.

With 3.9 million children living in poverty in the UK, and in households for whom buying food and other essentials is a constant struggle. As a result, we see children sent to school in unclean and uncomfortable uniforms, or clothes that aren’t uniform at all. These young people face being left out, feeling embarrassed, or being disciplined through no fault of their own.

Phoebe, Araam and Annie are three children we’ve supported in this area. Through Action for Children, their families received a small grant to buy their school uniforms. Read on to see the impact such a simple gesture of support has had.

Phoebe and her mum Eliza were attending one of Action for Children’s early years services when they received the grant. At the time, Phoebe’s first day of school was fast approaching and she needed a whole new school uniform. Despite wanting to provide for her daughter, Eliza was questioning whether they could stretch their money any further. The family were struggling to stay afloat as they were relying on just one small income.

Phoebe on her first day of school

The grant was a lifeline for Eliza. She didn’t have to make the choice that so many families face – a decision between food on the table or a new uniform. She told us, “Having the grant has made a huge difference… It took the stress out of finding the money elsewhere.”

Seeing Phoebe in her new uniform, with her new lunch bag and shoes, you could tell she was proud. Her excitement for the first day of school was undeniable, and she happily posed for a photo with a big smile.

Araam has autism, and attending school is important for him.

“When I am upset, I sometimes lose my temper, and this then gets me into trouble with everyone. School offers me support and helps me [overcome] the challenges I encounter,” he explained. “But my mum struggles to afford to buy me my school uniform… I am growing all the time and my clothes are getting too small for me." 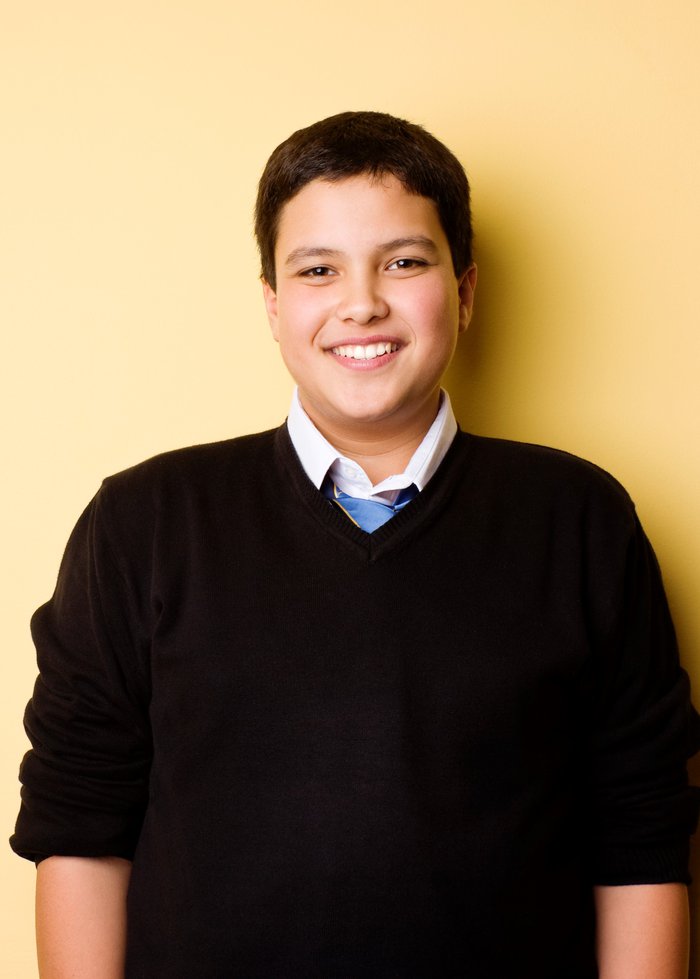 With no money to replace his too-small uniform, Araam was left with no choice but to attend school wearing the incorrect jumper. This was something he really struggled with because he didn’t like to stand out. To avoid this, Araam felt his only option was to stay at home and miss school.

“I want to be like all my other friends and wear a jumper with the school logo on it, but…if I don’t have the right clothes for school, I refuse to go.”

Receiving a small grant through Action for Children allowed Araam’s mum to buy him a school jumper that fit him perfectly. Feeling comfortable in the correct uniform meant he didn’t have to miss out on the essential support that school provided him. 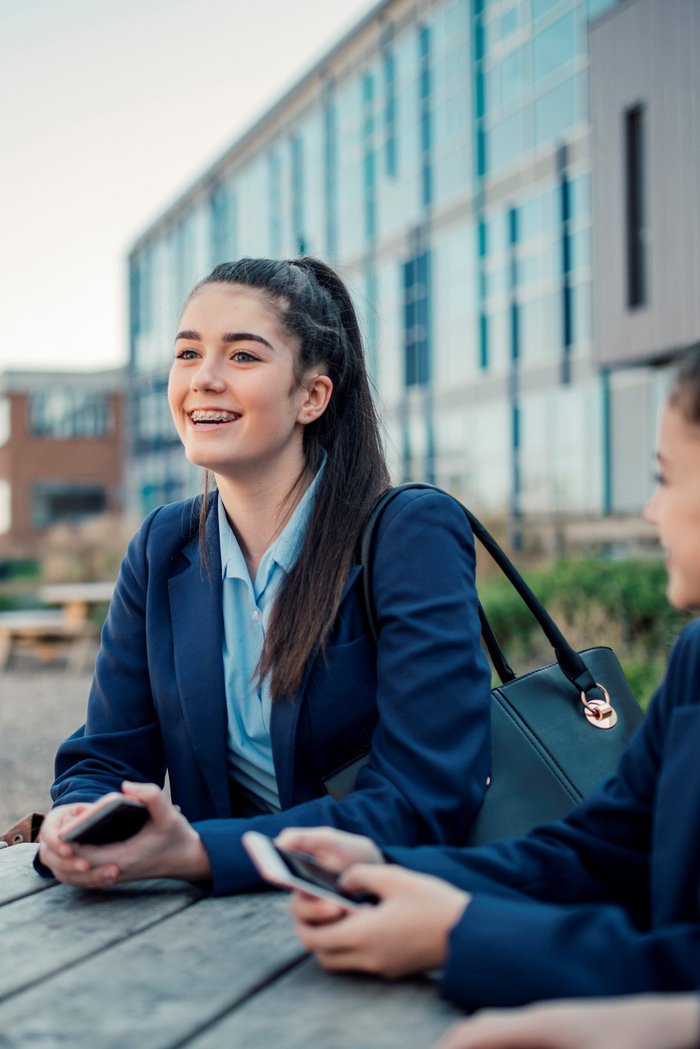 Having brand new clothes was a rarity for Annie. For most of her life, she wore second-hand clothes because her carers were unable to afford anything else. At school she mentioned that this made her feel inadequate and unable to fit in with the other kids. Her self-esteem took a big knock, and she began to isolate herself from others.

The new uniform Annie received led to a complete change in her demeanour and behaviour. For the first time, she could wear a uniform that was hers first. She was noticeably much more confident at school and no longer shying away from others. Instead, she began making new friends and participating in class too.

We want to see all children flourish

The impact of something as simple as the correct uniform is undeniable. It influences a child’s learning, their self-esteem and emotional wellbeing. When they feel comfortable and confident in what they wear to school, we see them flourish. Phoebe could proudly attend her first day of school, Annie finally felt confident and Araam stopped skipping school.

This grant, which is made possible through our partnership with Turner & Townsend “[is] small but it has a big impact,” noted Blanche Coalwood, who works on this project.

“We get handwritten thank you letters sent in from the kids and their parents, which shows us this money really does make a difference… and the feedback outcomes support this. We see reduced isolation, stress and the parents get to see get to see their child happy!” 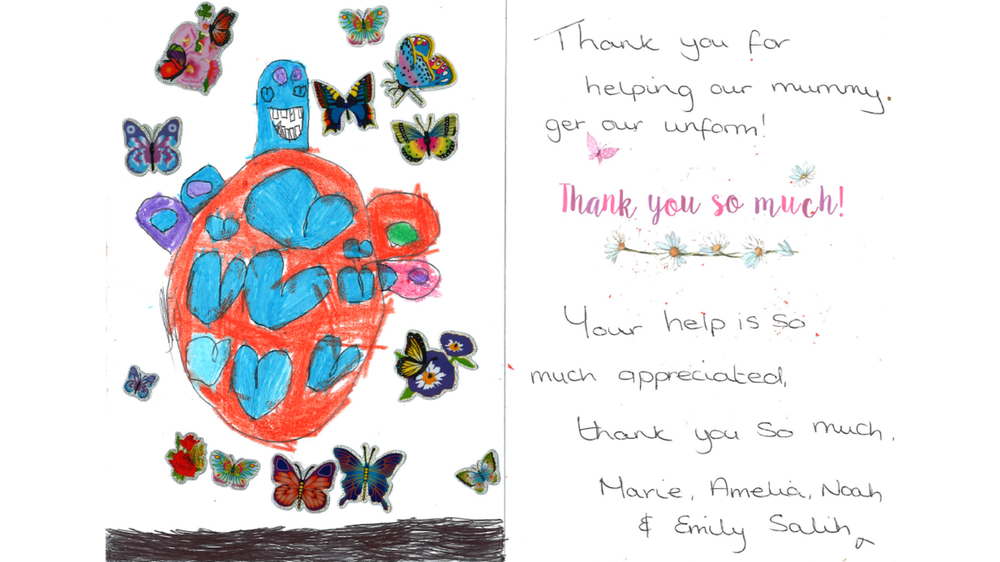 Thank you card from a family

The costs associated with school brings added financial pressure to families with limited budgets. Their struggles aren’t rare and reflect the inequalities we see in society. It’s a reminder that more needs to be done to help children living low-income families thrive.

Your donations could help us provide more children like Phoebe, Araam and Annie with a school uniform.