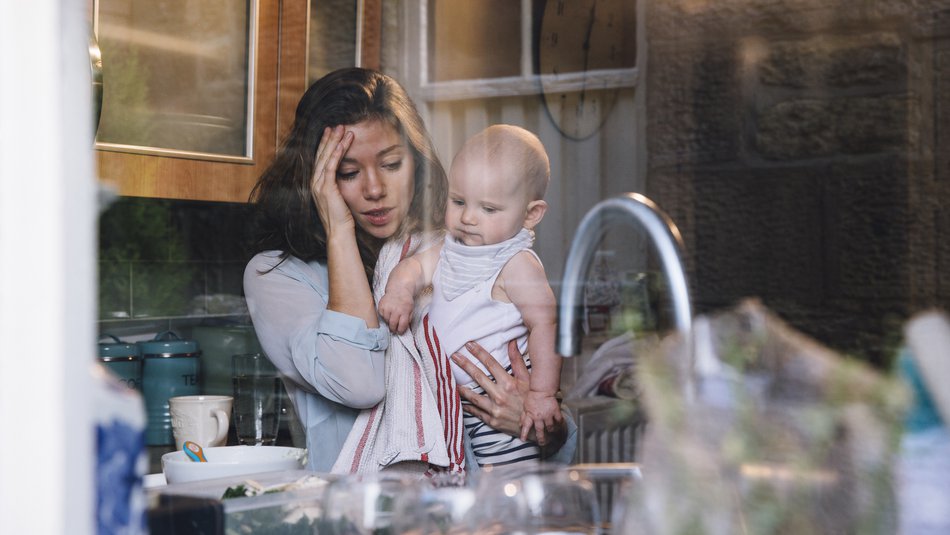 Hairdressers, shelf stackers and carers will be among those working families facing the biggest overall drop in their benefits income since 2010 when the cut to Universal Credit goes ahead next month, according to new research¹ by leading UK children’s charity Action for Children.

The charity commissioned research from the Child Poverty Action Group which reveals how much the £20-a-week Universal Credit increase has helped limit the damage of previous cuts to social security for working families since 2010. When the Universal Credit cut comes through, incomes will fall by £1,040 a year, but when added to previous benefits squeezes over the last decade, families will lose much more overall.

Analysing a typical sole-earner family with two children in a selection of common low- to middle-income jobs, the findings show hairdressers will be worst off, losing an average of £1,982 a year after the cut, followed by pharmacy assistants (£1,946 average annual loss) and shelf fillers (£1,843). [See notes for full table].

Even with the Universal Credit increase, the research shows this group of families have been out of pocket by an average of £750 a year because of social security losses over the last decade. When the £20-a-week-cut to Universal Credit goes ahead, the figures suggest their average annual benefit income loss will rise by 140%, to nearly £1,800 a year.

Around 3.4 million children are living in households that claim Universal Credit, according to the latest statistics from the Department for Work and Pensions². The benefit is due to be cut in a month’s time, on 6 October 2021.

Director of policy and campaigns at Action for Children, Imran Hussain, said: “We welcome the Government’s levelling-up agenda, but you can’t level up the country by pushing down the living standards of some of the hardest working families in the country.

“Too many childhoods are overshadowed by poverty and hardship, and the pandemic is making things worse. Our analysis shows the huge squeeze on incomes millions of working families will face at the end of this month. We’re talking about hairdressers, shop-workers and carers - not big earners but people who are proud to work and do everything they can to provide for their children.

“The Government needs to rethink its plan to cut Universal Credit – it’s a recipe for disaster for struggling families and clashes with the end of the furlough scheme when more parents will be at risk of losing their jobs, the extra costs of the school term and a rise in energy bills as we head into the colder months.”

Action for Children has today launched a new campaign, ‘Star in Every Child’, which asks the public to break down the barriers that stop children from reaching their full potential and help a vulnerable child shine. Find out more at actionforchildren.org.uk/star

Full-time sales executive Stacey, 35, from Yate near Bristol is a single mum to two girls aged seven and five.

After her fiancé and Dad to their two girls, Matt, died in a tragic car crash three years ago, Stacey had to claim Universal Credit to help her meet the basic costs of bringing up a young family on her own.

Stacey said: “Matt had been a full-time welder and I had a second, part-time evening job at a social club I had to give up as Matt wasn’t there to look after the girls anymore. All of a sudden, it went from three wages coming in to just one, and the bills were just stacking up.”

At the same time as trying to cope with the loss of her partner of six years and support her daughters emotionally, Stacey had to try and navigate the social security system for the first time, initially experiencing conflicting advice and frustrating delays.

“I just wasn’t in the right frame of mind to consider everything I needed to at that time – I didn’t know what was going on, I was such a mess.

“I then had to pay back the tax credits and wait five weeks for the first Universal Credit payment to come through. I could’ve had an advance on the money, but I turned it down because I didn’t know how much I would get or know if I’d be able to pay it back.

“I was very lucky my friends and family were there to help me. They organised a fundraising appeal which helped me through the five-week wait - if it hadn’t been for them, I’ve no idea what I would’ve done.”

The frustrations and stress didn’t end there. Stacey said: “Contrary to what the Universal Credit agency told me before, I then found out that even though Matt and I had been together for six years, and engaged for four years, I wasn’t entitled to any type of bereavement support because we weren’t married.

“And even though I took Matt’s death certificate to the Universal Credit interview, they also incorrectly processed him as still living in the household on the application, leaving me with only half the housing benefit I was entitled to.

“I had to message the work coach several times to point out the mistake but was still told ‘well, there are two people on the tenancy’. Eventually, after more calls and long waits, they apologised, and it was sorted but it was such unnecessary added stress at such a difficult time - having to go over the events of his death again and again just because they hadn’t listened – I was so frustrated and angry.”

Although Stacey is grateful for Universal Credit, she finds it simply isn’t enough with her sales job to support her two young children. She said: “School uniforms, school trips, surprise bills - everything is a constant worry – there’s not even the tiniest safety net – every day I stress about which pot do I pull it from. Do I turn the heating off or do I go without shopping for the week?

“I’m really going to struggle if they cut the £20 weekly uplift as prices for everything have gone up so much over the last year. I’m not sure how I’m going to juggle the finances around even more, so I don’t really want to think about it now – it’s just too stressful.”

After a year on furlough, Stacey has now returned full-time to her sales job but found childcare for before and after school prohibitively expensive. She said: “I had no chance of finding the initial £5-600 upfront amount needed – and it would’ve then been £100 a week. That’s so much more than I’d spend on food for three mouths in a week.

“I was lucky my parents helped me out – they look after them after school and in the holidays – but my mum works during term time so now looking after my girls, she doesn’t get a break, which is really unfair on her and makes me feel guilty.”

Stacey feels there needs to be much greater flexibility in the Universal Credit system, particularly regards it taking an individual’s circumstances into more consideration. With her sales job, for example, her income varies from month to month depending on targets being hit, which then impacts on her Universal Credit payments, making budgeting difficult.

She said: “In my job I should be able to earn as much as possible but because of Universal Credit, if I have a good month sales-wise or it’s a quieter month like Christmas, I get stung in the next month’s payment. It’s crazy, but it doesn’t benefit me to do well at work.

“Obviously, the world’s not your oyster on benefits – but it’s unfair how it affects people in different ways – like people I know who’ve lost hours then been hit by the benefit cap. It’s a system they’ve tried to fit all but it barely fits anyone.

“But more than anything, they really need to look at childcare costs. When people are on benefits - it isn’t usually because they’re too lazy to work - it’s because you’re expecting people on low-income to afford sky-high childcare costs – it puts people who want to work, out of work.

“There are so many job vacancies at the minute – not the greatest of work – but cleaning, stacking shelves, working in pubs – that are not being filled because there’s no affordable childcare – they just don’t seem to get the logistics.”

Stacey is a member of Covid Realities, a major research programme working with families on a low income to document their experiences of the pandemic and develop recommendations for change. Covid Realities is a partnership between the Universities of York and Birmingham, and Child Poverty Action Group, and funded by the Nuffield Foundation, see: www.covidrealities.org

¹ Loss in social security for a sole-earner couple with two children living in rented housing from 2010 to 2021: 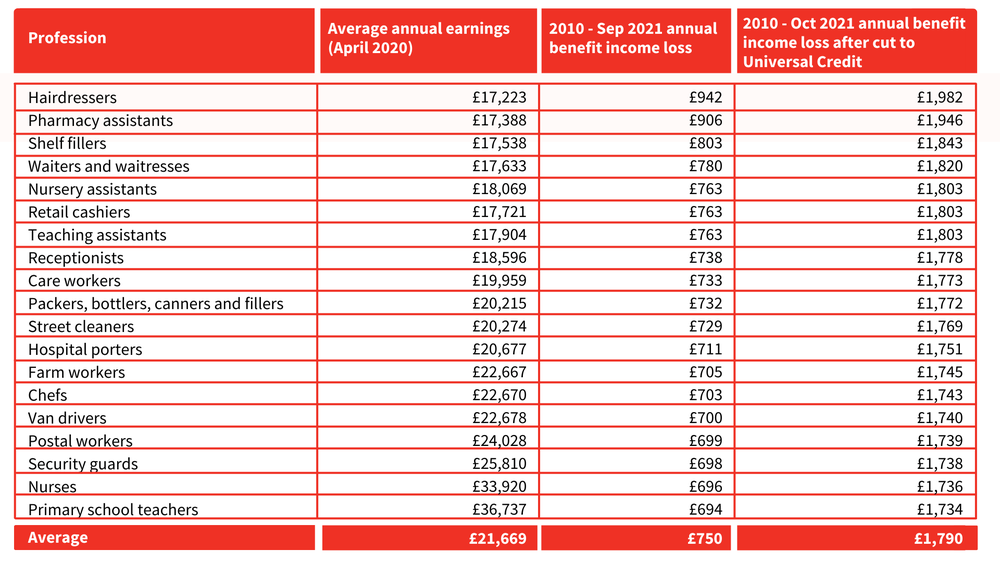 These figures are based on average annual earnings of a selection of common low- to middle- income jobs for a full-time sole-earner family with two children living in rented housing. Annual earnings come from Figure 6: Annual full-time gross pay by occupation, UK, April 2020, Employee earnings in the UK: 2020, Office for National Statistics, November 2020.